A burr is a raised edge or small piece of material remaining attached to a workpiece after a modification process.

It is usually an unwanted piece of material and is removed with a deburring tool in a process called ‘deburring’. Burrs are most commonly created by machining operations, such as grinding, drilling, milling, engraving or turning. It may be present in the form of a fine wire on the edge of a freshly sharpened tool or as a raised portion of a surface; this type of burr is commonly formed when a hammer strikes a surface. Deburring accounts for a significant portion of manufacturing costs.

In the printmaking technique of drypoint, burr, which gives a rich fuzzy quality to the engraved line, is highly desirable—the great problem with the drypoint medium is that the burr rapidly diminishes after as few as ten impressions are printed.

There are three type of burrs that can be formed from machining operations: Poisson burr, rollover burr, and breakout burr. The rollover burr is the most common. Burrs may be classified by the physical manner of formation. Plastic deformation of material includes lateral flow (Poisson burr), bending (rollover burr), and tearing of material from the workpiece (tear burr). Solidification or redeposition of material results in a recast bead. Incomplete cutoff of material causes a cutoff projection.

Burrs can be minimized or prevented by considering materials, function, shape, and processing in the design and manufacturing engineering phases of product development.

Burrs in drilled holes cause fastener and material problems. Burrs cause more stress to be concentrated at the edges of holes, decreasing resistance to fracture and shortening fatigue life. They interfere with the seating of fasteners, causing damage to fastener or the assembly itself. Cracks caused by stress and strain can result in material failure. Burrs in holes also increase the risk of corrosion, which may be due to variations in the thickness of coatings on a rougher surface. Sharp corners tend to concentrate electrical charge, increasing the risk of static discharge. Burrs in moving parts increase unwanted friction and heat. Rough surfaces also result in problems with lubrication, as wear is increased at the interfaces of parts. This makes it necessary to replace them more frequently. Electrical charge buildup can cause corrosion.

Electrochemical deburring is the use of electrochemical machining to deburr precision work pieces and edges that are hard-to-reach, such as intersecting holes. The process uses a salt or glycol solution and electricity to dissolve the burr. The electric current is applied with a specialized tool to reach the burr location. Burrs are removed in 5 to 10 seconds, while the rest of the work piece is unaffected.

Thermal energy method (TEM), also known as thermal deburring, is a deburring process used to remove hard-to-reach burrs or burrs from multiple surfaces at the same time. The process uses an explosive gas mixture to provide thermal energy to burn off the burrs. It is the fastest burr removal process, requiring only 20 milliseconds to remove a burr.

The process starts by loading the workpiece into an explosion-proof chamber, which is then sealed and clamped with approximately 220 metric tons (240 short tons). The chamber is then evacuated of air and filled with an oxygen and fuel mix; this mixture is pressurized to 0.5 to 1.9 MPa (73 to 276 psi). An electrical igniter then ignites the mixture, which burns for approximately 20 milliseconds, causing all of the sharp corners and burrs to burn away. The peak temperature reaches 3,000 °C (5,430 °F).

Cryogenic deburring is a cryogenic process used to remove burrs and flash from plastic and die cast workpieces. The process works by tumbling and/or abrasively blasting the workpieces at cryogenic temperature levels. The low temperatures (approximately −195 °C (−319.0 °F)) are achieved using liquid nitrogen, liquid carbon dioxide, or dry ice. This low temperature brings the material below its embrittlement temperature, which causes the flash or burrs to be easily removed via tumbling or media blasting. This process has been around since the 1960s to deflash plastic and rubber. Common materials that are typically cryogenically deburred with blast media include PEEK, nylon, Teflon, Delrin, polypropylene, polycarbonate, acetal, PTFE, PET, HDPE, PVC, ABS and many others.

Mechanical deburring is a deburring process that either mechanically grinds a burr off of metal or rolls the edge of dangerous slit or sheered metal burrs into itself. Rolled mechanical deburring was first developed in the 1960s by Walter W. Gauer from Gauer Metal Product, Inc. as a means to speed up the process of hand deburring strips of metal that were used in bakery racks. 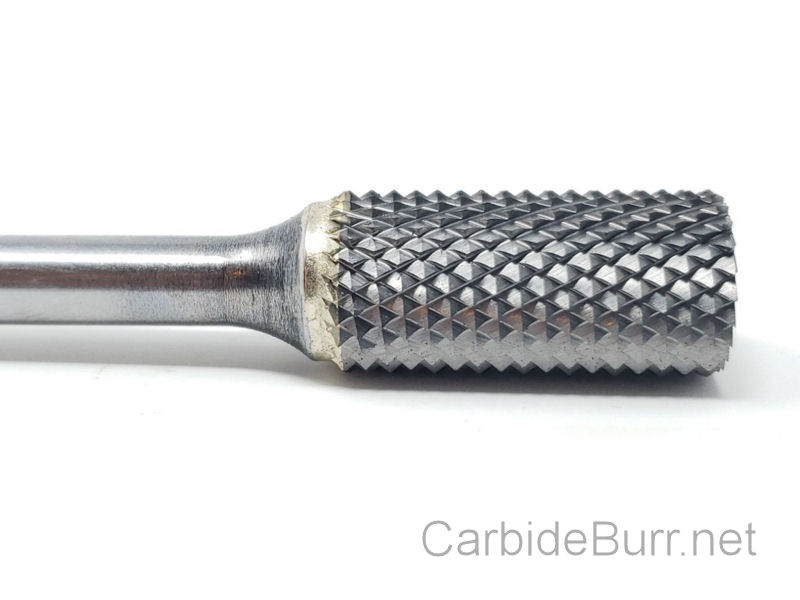